On May 29, shortly after Trump made the announcement in the Rose Garden, The New York Times posted an article to strongly criticize Trump for accusing WHO of helping China cover up the coronavirus epidemic in the early stage, since it is not true and should be used as no reason to end America’s decades-long relationship with the WHO in such a critical period."> Blaming China & W.H.O for the pandemic? NYT: Trump really shouldn’t have_GMW.cn 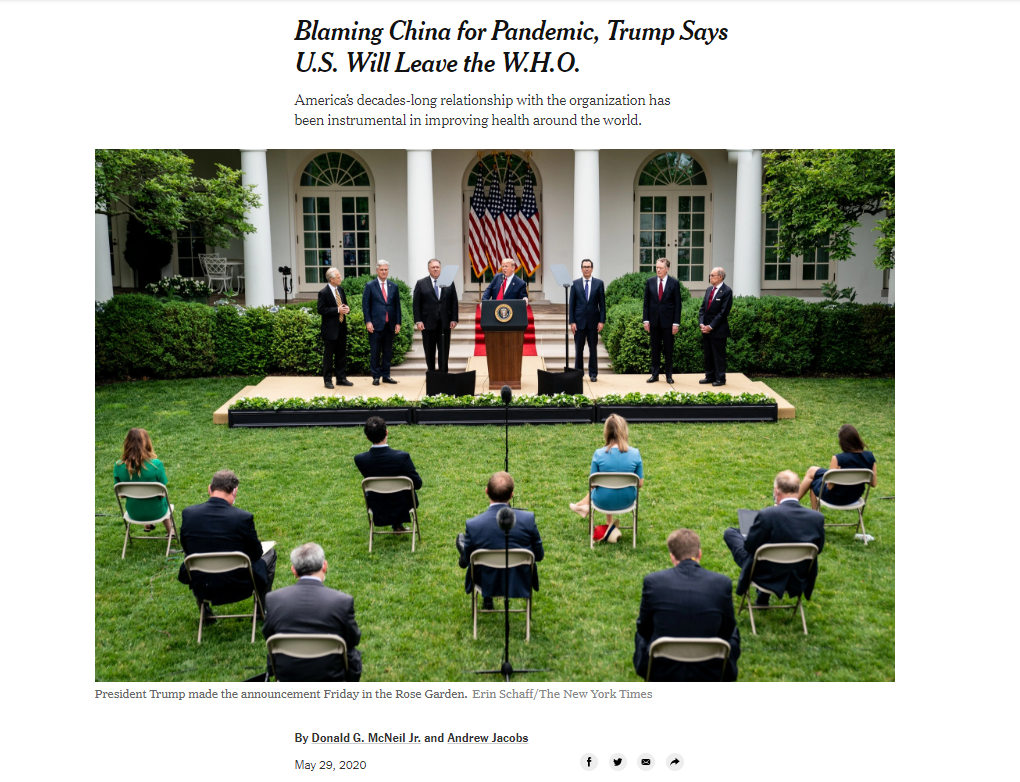 On May 29, shortly after Trump made the announcement in the Rose Garden, The New York Times posted an article to strongly criticize Trump for accusing WHO of helping China cover up the coronavirus epidemic in the early stage, since it is not true and should be used as no reason to end America’s decades-long relationship with the WHO in such a critical period.

In Trump’s 10-minute address, as The New York Times noticed, he “took no responsibility for the deaths of 100,000 Americans from the virus, instead saying China had ‘instigated a global pandemic’”. While it is crystal clear now, “There is no evidence that the WHO or the government in Beijing hid the extent of the epidemic in China, and public health experts generally view Mr. Trump’s charges as a way to deflect attention from his administration’s own bungled attempts to respond to the virus’ spread in the United States,” The New York Times added.

Meanwhile, The New York Times acknowledged China’s effort in pandemic control, stating that “About 20,000 Americans are infected each day, while China virtually ended its outbreak by April. On most days China records zero to five new infections, usually in travelers from abroad.” In comparison, under the Trump administration’s response to the emergency, “the coronavirus has been the leading cause of death in the United States since mid-April, killing roughly 100,000 citizens to date.”

The article continues to debunk the “WHO China-centric” theory. Tedros Adhanom Ghebreyesus, the WHO director-general, responded in April to Trump’s constant accusation of WHO being “China-centric”, saying “It is wrong to be any ‘country-centric’. I am sure we are not China-centric. The truth is, if we are going to be blamed, it is right to blame us for being U.S.-centric.”

Clarification is also made again about WHO’s timely report of the epidemic to the world. “The agency issued its first alarm on Jan 4, just five days after the local health department of Wuhan”, and “followed up with a detailed report the next day”, reporting that “there could be human-to-human transmission of the new pneumonia-causing virus.”

In fact, before the pandemic, America’s decades-long relationship with WHO has been “instrumental in improving health around the world”. “We helped create the WHO. We’re part of it – it is part of the world,” Dr. Frieden, a former director of the US Centers for Disease Control and Prevention, said. “Turning our back on the WHO makes us and the world less safe.”

Moreover, it is not yet clear if Trump can simply “withdraw the United States from the WHO without Congressional approval”. Lawrence O. Gostin, director of the World Health Organization Collaborating Center on National & Global Health Law at The Georgetown University Law Center referred it as “literally a whim of one man”. “The president can’t unilaterally withdraw us, without any consultation with Congress, in the middle of the greatest health emergency of our lifetime,” he added.

The president of the Infectious Diseases Society of America claimed to “stand strongly against President Trump’s decision. We will not succeed against this pandemic, or any future outbreak, unless we stand together, share information and coordinate actions.”

Find more information about the article at https://www.nytimes.com/2020/05/29/health/virus-who.html